This article was originally written by, and published on, the Lake Roland Nature Council website. To view the original article, please click here.

This past winter, volunteers from Lake Roland Nature Council and the Maryland Native Plant Society initiated a test plot to attempt to clear invasive Virginia Pine from the Park’s serpentine barren. Thanks to the Society for allowing us to reprint the article below from the Spring 2013 issue of their journal, the Marilandica.

There has been much activity at Lake Roland since 2010 when Baltimore County took over stewardship of the park and a group of citizens formed the Lake Roland Nature Council. The park’s infrastructure has been improved, including repair of the old railroad trestle across Jones Falls, and a new boardwalk, picnic pavilion, and dog park. Heavily used by dog walkers, Lake Roland is now the only park in the county that employs rangers to enforce park rules, including leash laws. Several local garden clubs are planning to install a native plant garden in an area close to the Lake Roland dam. With advice from MNPS, they have compiled a list of suitable species and expect to begin planting this year.

From a naturalist’s perspective, the park’s most interesting features are the wetlands around Lake Roland, beloved by birders, and the serpentine barren, home of several rare and uncommon plant species including Phemeranthus teretifolius (Fameflower). Over the last several decades, this grassland/prairie community has been impacted by the spread of Virginia Pine. With the full support of park staff and the Nature Council, a project has begun to find out whether quality prairie community can be expanded by removal of pines. This project is under the leadership of Dwight Johnson of MNPS and the Lake Roland Nature Council, Charlie Davis of the Natural History Society of Maryland, and paleobotanist Bill Hillgartner, who has maintained a serpentine study plot in the park for over 10 years. They selected an experimental area of about one acre that still retains a healthy prairie plant community despite scattered trees. This spring, members of the Nature Council Trails Committee will cut the trees in that area and they will be removed by a group of boy scouts as part of an Eagle Scout project. The hope is eventually to expand this quality area outward. The preferred tool would obviously have been fire as is used in Soldiers Delight, but that is not possible given the proximity to a residential area. Dwight, Charlie and Bill plan to perform a complete biological survey of the experimental area this year, and then to observe changes over the next several years.

Starting in 2012 Dwight Johnson is conducting a plant survey of the entire park, which includes over 320 species so far. Participants in MNPS field trips will undoubtedly add to this list. 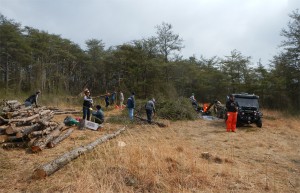